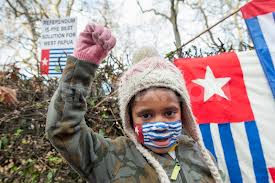 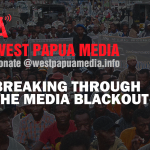 As civil resistance movements across the world start shaking their way into global media consciousness, West Papua Media is one of the few independent media networks that have a head start on nurturing ‘witness journalism’. West Papua Media is a project that came into play to counter Indonesia’s foreign media ban, which was making it increasingly difficult for international news crews to get into West Papua to document events and abuses on the ground.

West Papua Media was created in 2008 to close a critical information gap in coverage of the human catastrophe in West Papua.  Long term human rights, environmental and human security investigators and journalists covering the Melanesian area were disturbed at the wilful ignorance of the Western media to the ongoing human rights abuses and corruption of the Indonesian occupation of West Papua.

The mission of West Papua Media is simple: whilst reporting credibly on the issues facing West Papua today, we are here to assist in the development of a professional (unpaid at this stage unfortunately), robust, credible, and independent SAFE civil and investigative media capacity in West Papua.  In short, Free Media for West Papua, helping the Voiceless Roar, with the skills to counter any attempt to silence that voice.

We want to stop people from being afraid of speaking out, and we want West Papua’s voice to be its weapon, to broadcast its songs for Freedom.

Their live and committed monitoring of civil resistance mobilisations (and of security force mobilisations) has now begun to be seen by others as a deciding factor in creating effective restraint, a restraint that has prevented security forces from behaving badly on many occasions during civil resistance situations.  However, in those remote and dangerous areas where  teams have not been able to penetrate in real time, this has meant heinous abuses continue – something we need your help to prevent.

West Papua Media needs your help to grow, your help to be able to deliver Safe Witness Journalism Training to the people who need it the most – front-line journalists and human rights workers in highly dangerous situations regularly facing security force violence, corruption, or resource company abuses; in many cases these situations are further compounded by isolation and lack of safe communication potential.  They need your help to be able to pay for their stringers to penetrate active military zones, with relative safety, to report on the significant human rights abuses occurring there.

To get this to happen, West Papua Media requires assistance for major fundraising to enable effective journalist training, and to sustain their unparalleled efforts for Independent Human Rights Journalism for West Papua.

HOW CAN YOU HELP BUILD A FREE MEDIA FOR WEST PAPUA?

To help their work, we are asking for assistance from your or your organization, assistance that will play a strategic role in the future of a free media in West Papua, and thereby contributing directly to the exposure and ultimate prevention of human rights abuses in our region.

How will tour donation be spent?

Please help us to support a free and independent pacific