In November, three university students took part in the Edmund Rice Justice’s first Auckland Immersion Street Retreat. The participants were invited on the retreat but with no information as to what the weekend would include or focus on. It involved living on the streets of Auckland for the weekend and taking part in a number of activities and experiences in various parts of Auckland. The themes that the group explored included homelessness, the objectification of the poor, the ways in which we use stereotypes, wellbeing and cross cultural engagement in the Auckland context. The group worked with St Vincent de Paul in Kingsland and had support from the James Liston Hostel and Auckland City Mission. After each experience there was a small group reflection and a final reflection to conclude the weekend.

The participants were all current leaders from Edmund Rice Camps Auckland. 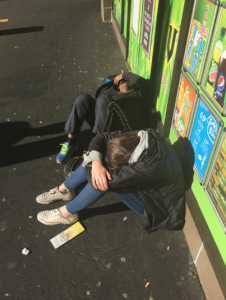 During the reflection they commented that the street retreat included several themes that were linked together through the experience of people in each situation. They saw how people are acknowledged and treated in different areas in Auckland and how this made them feel. One participant said their experience on the street retreat would stay with them and has changed the way they thought about rough sleepers, stereotypes and the idea of the poor.

The photos include working at the St Vincent de Paul shop Kingsland and getting some sleep outside the Auckland City mission after a night of no sleep on the streets. It is planned to offer this particular weekend experience again in 2016 both Auckland and Christchurch.

For more information, send us an email.