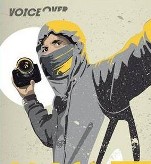 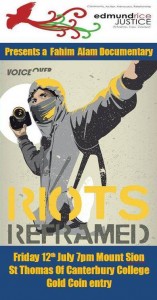 VoiceOver | Riots Reframed is a feature-length documentary which reframes England’s 2011 riots through voices of resistance – threading these perspectives together using moody instrumentals, dramatic monologue and raw spoken word. This hard-hitting film is unique both in its scope and the journey that produced it.

The idea was conceived soon after the producer, Fahim Alam, was released from prison on bail, after being arrested for taking part in riots. With virtually no knowledge of filming and editing, he set out to make an independent and complex documentary. Most of it was filmed whilst Fahim wore an ankle tag and was subject to a strict curfew as he awaited trial for the charge of ‘violent disorder’.

The documentary takes the viewer through a journey that begins in Tottenham and spirals out to a detailed look at the role of police, power, racism, government, prison, war, resistance and more.

Although the voices base their analysis around the riots, the scope of Riots Reframed is much wider and stands in its own right as a poetic but fierce challenge to the system we live under and the suffering it produces. The result is a radical social commentary grounded in knowledge and art, that synthesises a number of voices, from prominent social, cultural and political analysts, to prisoners still recovering from time inside.

VoiceOver | Riots Reframed is simultaneously engaging, informative, thought-provoking, emotion-stirring, and importantly, a challenge to the media institutions that serve the narrative of the power structure. This film is a historical document not to be missed.