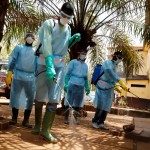 “We never had any mechanism in place for such an invincible and merciless virus. . . The situation is still not under control. It is too big for government to handle we need to step up.”
Br. Pious Conteh, Sierra Leone, Sep 2014

Just last week, Edmund Rice Development received the very sad news that two students who attend one of our schools, St. Martin’s in Liberia, and their families, have been killed by the Ebola virus that is currently sweeping West Africa.

The 2014 Ebola outbreak currently devastating the people of West Africa is one of the largest Ebola outbreaks in history and the first in West Africa. It began in Guinea in March and has spread to the neighbouring countries with confirmed cases in Liberia, Sierra Leone, Nigeria and most recently Senegal. At time of writing there have been 2,106 laboratory confirmed cases. This disease has had a devastating effect on West Africa and has directly affected our schools, projects, Brothers and the communities in which they work.

The World Health Organisation (WHO) has warned that the magnitude of the disease has been underestimated and there are “invisible caseloads of patients who are not being detected by the surveillance system.” Families are hiding infected loved ones, on the assumption that, because Ebola has no cure, it would be better for them to die at home rather than in hospital. However, effective treatment can improve chances of survival  – a message that health authorities have been struggling to communicate to increasingly fearful populations.   Br. Sylvester Lahai writing from Liberia also said that “the problem is further complicated by the belief on the part of some people that the disease is not real.”
The World Health Organization has drawn up a draft strategy plan to combat Ebola in West Africa over the next six to nine months, implying that it does not expect to halt the epidemic this year.

Brothers and Edmund Rice people in Sierra Leone and Liberia are trying to help people in extremely difficult circumstances. In many of the communities curfews and restrictions have now been put in place in an attempt to limit the spread of the disease. The West Point district in Monrovia, the capital city of Liberia has been put under quarantine which means that approximately 75,000 people have been sealed into a densely-packed slum. This type of situation is now being repeated in many parts of Sierra Leone. All schools remain closed in a further attempt to limit contact between people.

Br. Pious Conteh, Province Mission Officer for West Africa sent us the following update on the situation on the ground:
‘Within just one week the number of cases in Freetown have almost doubled. Freetown nurses have undertaken a sit-down strike this week following the death of one of their colleagues after contracting the Ebola disease in Freetown. The Ebola outbreak has exposed a weak health care system in Sierra Leone and West Africa at large. Ebola as an emerging disease in Sierra Leone caught us off-guard. I cannot honestly criticize anybody or political party or government for the havoc the disease has caused because we never had any mechanism in place for such an invincible and merciless virus.
We should all remember that we are still recovering from ten years of destructive intra-state conflict. Although the civil conflict officially ended over a decade ago, Sierra Leone is still classified as a fragile state and it is our responsibility to catapult ourselves from fragility to resilience. To all our supporters and partners, please keep Sierra Leone in your prayers, we need it. A lot is happening in the country that is not Godly. The situation is still not under control. It is too big for government to handle we need to step up.”

Edmund Rice Development has launched a West Africa Ebola Relief Fund to help West African Brothers, and the communities they live and work in, to respond to the Ebola crisis.
Funds raised will contribute towards such critical items as: